Lakitu Video in a Minute. ... What Just Happened?

Originally I was opposed to making a post about this, buuuut after some thought I've decided that this could use a short one.

Yesterday, IG uploaded a short (1 minute 13 seconds) sketch video. It didn't make sense.
We see IG playing Super Mario Bros. 3 BADLY, rather playing badly on purpose. Don't jump into the spinning platforms you dumbass! Go into your inventory, use a leaf, and fly through the level. It's World 5-4.

He then says he needs lives and a 1-Up Mushroom dangles next to his head. IG refuses it. Um why? Unless he's savvy enough to know that grabbing an item will cause Lakitu to throw Spinies, but I seriously doubt that he does. Plus, Lakitu doesn't do that until Super Mario World, so having him do it in a video about SMB3 doesn't make sense.

After a little bit, IG yells at the Super Mario World Lakitu (see, wrong game!) and then Lakitu hits him with the mushroom and fills his room with Spines up to his chest. He let's out a horribly hammy "ow", the credits title card shows up, then a Spiny gets on his head as he tries to blow it off.
... I DON'T GET IT!

The title doesn't make sense. "Lakitu's Revenge". Revenge for what? All IG did was call him an asshole. Is that really something to get worked up over? I call IG an asshole all the time, why hasn't he taken revenge on me?
I guess the title would make sense if in the game he kills a Lakitu, but he doesn't. He's just purposely failing on a level he can just fly over.
Where was the joke? He yells at a video game character and they hurt him? I don't get it! It's like Bores needed to get something out to tell people that "yes, I still talk about video games". Or he needed money.

I wonder why he didn't just do another contest, he never even announced the winners of that one from two months ago. Hmmm.

It's funny how Bores planned the next History of Video Games for 2011 but a couple weeks ago said he didn't have the consoles needed. Nice planning asshole!
Posted by BatDanNight at 5:05 PM 211 comments:

The Contests Are Rigged! Plus Other Info

For the longest time, I've had a feeling there was something wrong with IG's contests when the winners were mostly obvious fanboys like Karbia Yuan and lukestarkiller. Turns out, I was right!

Bores doesn't pick the winners, Mommy dearest does. That's right, Bores doesn't care about you but LadyBuggin777 AKA Linda knows who's being a good Irate Gamer fanboy and tells Chris they deserve special treatment with free stuff.
On some video of some person meeting IG, Linda has been arguing her head off. Considering that's all she knows how to do, I'm not surprised that responses are childish and immature.

During this, some interesting facts came out.
First off, Linda confirms that she picks the winners of the contests. Meaning the requirement for winning isn't writing "Pick Me" in the "comments box blow" but to be a loyal Irate Gamer fanboy and to be nice to Linda. So to the casual IG fans that do read this (and I know you d0), sorry but you have no chance!
Proof:

This outright confirms that the contests are rigged and that it's disgusting that he keeps doing them.

Here's another tidbit that I'm pretty sure she's lying about, if not then I have lost a ton of respect for Eric Allen.
For those that don't know of the utuber377 PMs, a user sent Bores a YouTube PM asking about a holiday special with a tiny mention of plagiarism. His response was incredibly rude, so utuber responded back and began a back & forth chain that showed how much of an arrogant ass Chris Bores truly was. With such gems like "You will never be as popular as I am" "I make money off your whining, cha-ching bitch" and "I am better than you, deal with it"
Months after, utuber would claim the whole thing was fake despite evidence to the contrary. Such as IG sending similar messages to other users.

Linda then revealed this little "fact". 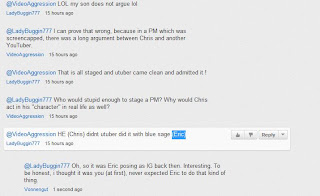 She claims the entire chain of PMs was staged by utuber and Eric "Wise Sage" Allen. I call bullshit! Why would Eric agree to make his friend look like a shithead? Did utuber ask him "Say you want to make Chris look like a total douchenozzle to the world?" and Eric agreed to it? Why would you buy this so easily Linda? It's something that makes your son look bad, something you've dedicated your LIFE to preventing as I have seen in your hundreds of childish comments. Which is too late by the way as associating yourself with IG can be seen as toxic.
It just doesn't add up!
If Eric really did do this, respect points way down.
By the way Linda, it's WISE Sage, not Blue Sage. I hate the show and even I know that.

In fact, Linda seems to be the co-show runner but without any of the credit. Good lord.

In other news, it turns out Haunted Investigators really might be coming back. Bores was in Miami with Alan Cicco. The only reason Alan would be there is if it involved Boring Ghost Shit. Uggggh.

That's all I have to say for now. I feel unclean.
EDIT: By the way, if the comments disappear and Linda claims they're fake, they are not. They have been screencapped by my informants.
You can read them here: http://www.youtube.com/watch?v=ahzUu3H88kY
Warning: Stupid video and even worse comments.
Posted by BatDanNight at 12:07 PM 206 comments: