My Facebook informant has noticed some troubling things coming out of Chris lately.

A few days ago Chris posted a link from InfoWars, the awful conspiracy site. Admittedly I figured he was an avid Alex Jones fan. Just look at LadyBuggin, the only things he did with that account besides argue with people were favorite his own videos and favorite videos from Alex Jones. I felt it wasn't worth making a post about.

But then he just posted this, a screencap provided by my informant. 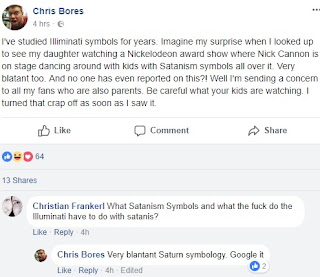 He saw something on Nickelodeon that got him mad, and now he's going full blown tinfoil fuckery.
Putting aside that he misspelled Illuminati, that's been debunked for years! Before most of us were even born! Has Chris gone this far down the deep end?
Oh and of course, no evidence provided, and as you see from that reply, he refuses to give any. "Fuck you asking for proof, find it yourself". The lazy hack method.

Chris, you need help. Serious help. This isn't a healthy mindset. Turn off the InfoWars, get out of Ohio and see the world. You'll feel better.

Hell, if you want a real Nickelodeon conspiracy, look into Dan Schneider.

EDIT: Hey so due to spam bots, Blogger's filter has been going crazy and marking legit comments as spam. So if your comment somehow disappears, it's the spam filter and I didn't notice. My apologies if your comment vanishes, just be patient (unless I clarify and give a reason why it's gone)

EDIT 2: Ooooooh wow. Okay so my informant saw a new comment added, and it seems that person saw what Bores was talking about. The image that triggered Bores so much... was the Eye of Providence. AKA the All-Seeing Eye.

Yes, that. The eye that's on every American dollar bill. The symbol that's been conspiracy fodder for decades, perhaps before even Chris was born (who by the way is turning 40 this year). The eye being "evil" or something is basically a meme at this point.
Chris, you actually unironically believe this? This is too funny. The ghosts are one thing but to believe outdated crap like this? How do you function? Can you even use cash? Just amazing.

There was also a really funny comment from Brad Jones.
"I could have told you this last year when they sacrificed Ariana Grande on an alter made of pig bones while Victoria Justice wore a giant goat's head and a cloak. It was a weird way to announce Best Voice Actor."
Now I want to see Brad riffing on terrible Nickelodoen sitcoms. If he can get through Fuller House, those would be no problem.
Posted by BatDanNight at 4:42 PM 50 comments: