Another Plagiarism Accusation. Only This Time Chris is the Accuser?!

So here's something interesting. Chris posted on Facebook again but it's something quite different.
Chris has accused Ghost Hunters host Grant Wilson of plagiarism! ... That is riiiiich coming from Chris Bores. Him being the one to accuse someone of stealing. So what exactly happened?

My informant linked me a screenshot of his post. 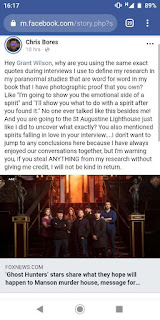 So he's mad because Grant is saying he wants to show the emotional side of a spirit, and what to do with a spirit after you find one, and Chris claims only he was doing stuff like this. ... Were you? These concepts sound vague enough that any jerk-off with a beepy ghost meter can say they're an expert. Sounds to me like you're fishing for attention again, especially with Halloween approaching.

Only one comment seemed to care about this. Being surprised that Grant would do something like this. Chris responded "me neither, but I don't know what to think after reading this." Really? Sounds to me like you're already accusing him of theft. That paragraph makes it pretty clear what you think.

The rest of the comments, of course, didn't care at all. Asking when the next IG is out. There is only a month left of Summer. At least you could check those comments, but my informant noticed that they're all gone. Chris, why would you delete those? What's weird is that similar comments on older posts are still there. Is Chris really that passionate about this possible purloining that he doesn't want to address IG? Or maybe ... Chris has gone back on his promise? There is no Irate Gamer comeback, and he wants to avoid bringing it up at all.
Maybe it has to do with Ghost Hunters coming back on TV after a 3 year hiatus, and Chris is stuck doing crappy puppet shows with copyrighted characters.

Ah yeah, recent Puppet Steve video had him do a crossover with Vincent Carter AKA Duddy from the channel "FGTeeV". Looking into it, it's the channel behind Skylander Boy & Girl (which probably explains how Chris got him on) and the main source of videos now that Skylanders is DEAD. They have nearly 12 Million subscribers, so if anything this is meant to be a boost for Chris. ... Right?
Apparently all the revenue Vincent makes can't afford a green screen since all he did was record audio and sent it to Chris, who basically "South Park'd" his appearance into the video. It looks terrible. If you're wondering what they talked about, it was FGTeeV related toys. I imagine all inside jokes related to them. You know, if you're able to license your brand out for merchandise on a large scale, and have a channel with nearly 12 million subscribers, I think you'd be able to fly to Ohio and appear in a video like this. Then again, Chris and his 584k subscribers were probably not worth your time. I wouldn't blame you.

Think we'll get a follow-up on this BIG GRANT WILSON SCANDAL or will Chris just forget about it after realizing this latest bait for attention failed.

Anyone excited for Astral Chain? 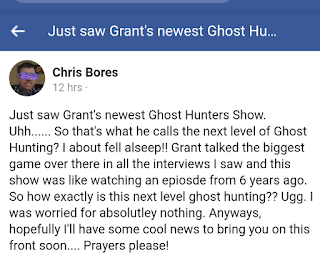 This seems very off-kilter even for Chris. Was he drunk when he wrote this? It feels like the ramblings of an angry moron.
Frankly I don't see what Ghost Hunters does differently from the shit you do Chris. It's all just a boring walk around a location in the dark, yelling for something to happen.

Also, "prayers please". Prayers for what? For a Buddhist he's really deep into Christian ideology. Can't shake that stink off from childhood huh?

I am convinced that his target date was a lie, something to tell his remaining fans to get them thinking "Summer! He'll be back!"
He has shown no signs of even starting production, mentioning his "lack of time". Yet Chris has plenty of time to listen to podcasts.

Yeah, seemingly out of nowhere, Chris brought up "nerdy podcasts" on his Facebook page. Crying that they all suck and he wants recommendations and is considering starting his own.
I have questions. Which ones are you listening to? What are the problems? What would your own podcast even be about? You know nothing about current events in gaming so that's out of the question. Would it just be a repeat of the Irate Gamer blog? "Alright, I found these Star Wars salt and pepper shakers shaped like C-3PO and R2-D2. They look so life-like and so super cool. I can flavor my food with the force!"

So his fans gave him some. One brought up Pat "The NES Punk" Contri and Ian Ferguson's podcast, but it devolved into "Pat sucks" posts. Though the shocking thing is several fans claiming they want a Ronnie the Skeleton podcast. How would that even work? 2-3 hours of a gibbering moron? Who would want to listen to that? What would Ronnie even talk about? And why does he have so many fans now?

But yeah, I don't see Chris actually taking time to do a podcast. It's just more bait for his fans. He's always going on about how "these guys suck and I can do better" but he never follows up on that. And he never mentions who the other guys are.

He also brought up ghosts again. Thought he was done with those? Apparently not. Then again, it is almost October, and Chris has somehow turned his ghost hunting obsession into a seasonal job. "Oh hey it's almost October, better call that moron that thinks the community center is haunted".

Same old shit over on Puppet Steve. Still talking about Baldi's Basics for some reason. He also posted a couple videos talking about Stephen King's It. Oh yeah, the horror movie about the eldritch monster that takes the form of a clown to MURDER CHILDREN. Perfect material for your toy channel targeted to 7 year olds.
According to my informant, there are comments on the videos that do call him out for talking about adult content like It or South Park or Rick & Morty. Chris just doesn't care.

*slinks back into the shadows*
Posted by BatDanNight at 10:34 AM 18 comments: