Last week, Chris uploaded GeekTime Episode 5 to YouTube. It barely has views and has more dislikes than likes. At this point, it's safe to declare GeekTime a failure. Nobody asked for it, and nobody likes it.

That's probably one of the reasons Chris has been so angry lately. Combined with him watching all these ghost shows where he's not involved. In fact, there's another rant. 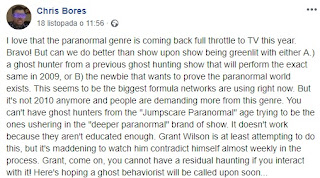 I am now convinced that "Ghost Behaviorist" is just something he made up to make himself feel better. Feel more important than all the other ghost hunters out there. He's clearly upset that nobody is inviting him to these shows. But why would they? What would you add? Chris, it's time to give up. It's time to hang up the hat on the ghosts. Surely after 14 or so years, you would realize that nobody wants to hear you talk about ghosts.

Anyway, what's going on with Puppet Steve?
Within the last couple hours, he posted a video about Pokemon Sword & Shield! Oh wait, sorry, he merely put that name in the title, and used it as an excuse to talk about Pokemon toys. Not even trying with this.
Last week he posted a 19 minute video about Mario & Sonic at the Olympic Games Tokyo 2020. Or rather, Mario vs Sonic. Yes, after 12 years he still gets the name wrong. What is his problem?
Bunch of other crap. Video about Playmobil tying into the movie, for some reason he included Deadpool. Reaction to the new Sonic movie trailer with the updated look. Nothing else really worth mentioning. ... Except for one pretty big thing.

In 1998, the U.S. Government passed the Children's Online Privacy Protection Act, or COPPA for short. This law was written to forbid data collection on children under 13 years old without their parent's permission. A great policy as young children wouldn't be able to consent to that.
Guess which big business violated this law? Good ol' YouTube. Turns out they were collecting data from kids watching their extensive library of children-safe videos, and the Federal Trade Commission has called them out on it. YouTube has now settled on giving them $170 million for these violations.  That's a pretty big sum of money.
And like the Adpocalypse, YouTube's response to this has been overkill. They will now be implementing new rules where you have to mark your videos as "for kids" or not. If you mark it "for kids", the video basically vanishes. No notifications, no comments, no ability to search it, it will not be recommended, and the user will get a massive 90% cut in revenue. That's pretty bad. To make things worse though, if you don't mark your video "for kids", but YouTube determines that the content appeals to kids, the FTC can fine you for $42,000. This has lead to thousands of content creators freaking out, especially people that talk about video games or toys (such as Transformers or Kamen Rider). Creators and fans have been flooding the FTC and YouTube with complaints, calling out these stupid policies. Unless something changes, YouTube is about to hit an incredibly dark future.

You probably noticed that this is also bad for Chris. Obviously, his Puppet Steve videos are meant for children, so he can't lie about that. But if he marks it for children, he loses so much of his money. He's screwed either way. What is Chris to do? He can't do Patreon, parents would freak if the funny puppet man started begging their kids for money. Perhaps the return of the Irate Gamer for the 20th time? He'll have to settle on Patreon for that though. Oh, but wait, didn't Chris say Patreon was "too complicated"? What an impasse we have reached. ... Really though, I think Chris used that as an excuse because he's lazy and he hates the way YouTube keeps changing. Refusing to adapt.

Is Chris' career on YouTube over? Has YouTube's fuckery finally gone too far? Can't answer the first one, but yes, they have gone too far. We really need a good competitor. I'm not asking for a return to 2006 YouTube with all the old TV shows, but something that won't flag you for using public domain music because you used the wrong recording.

Maybe this is why Chris has been doubling down on the anger towards the ghost shows. He knows his YouTube career is one foot in the grave, so he's desperately trying to get their attention. It's clearly not working.
Posted by BatDanNight at 4:51 PM 70 comments:

Threatening to Quit "Geekdom" Over... Watchmen?!

I did not expect to have a new post soon. No, there's no GeekTime and Puppet Steve hasn't done any video games. Though he has done videos on Muppet Babies, Glow-in-the-Dark FNAF, and... Sonic cereal? Blue cereal? That's disgusting. Sorry, getting off-topic.
No, instead he posted something really stupid on Facebook. Talking about the new HBO series adapting Watchmen. Before on GeekTime, he complained that the show was using White Supremacists as villains and felt that would alienate white comic book fans. Chris let the mask slip a little. How long until we get an angry cartoony rant where he screams about how the Jews and blacks should worship him?

He finally got around to watching it and posted his thoughts on Facebook. Full disclosure, I haven't seen it yet because I don't have HBO. Perhaps if it's on HBO Max, I'll get around to it.

I will give credit for not bringing up the villainous White Supremacists. However, holy shit at this hyperbolic reaction!
You hated it so much you want to quit all "pop culture" in general? That makes no sense! That means giving up your precious Marvel movies, your Star Wars, giving up video games which you clearly didn't care about in the first place, but that means giving up FNAF and all that shit you talk about on Puppet Steve. You can't just declare you're giving up on "pop culture", that's an idiotic statement.

Giving up on GeekTime though... hmm perhaps this is a smokescreen for dropping another failed project of yours? Fans still aren't receptive to it. In fact, he's lost over 1000 YouTube subscribers since he started posting excerpts. Not like the views are much better either. A few days ago he posted a 43-minute excerpt from Episode 5, talking about their Top 5 Halloween Movies & TV shows. Barely over 700 views.

Really makes me wonder what was in the Watchmen TV show that made Chris so upset. He doesn't go into detail other than "boring" and "confused". Most reception I've seen has been really positive.

Wait, a disgrace to Alan Moore fans? You never read the original comic. That was clear from your review of the movie back in 2009 (holy crap it's been 10 years). Okay, to be fair, he may have read the comic in that time gap. Besides, Alan Moore fans are used to getting screwed over. Constantine, League of Extraordinary Gentlemen, Doomsday Clock.

Anyone that's seen the show let me know what issues he could possibly have? It could be the White Supremacists and he doesn't want to say it knowing he could get in a lot of trouble (though that didn't stop him on GeekTime), but maybe there's something else.
Posted by BatDanNight at 6:01 PM 52 comments: