Another Year Gone. One More Conspiracy.

2018 is coming to a close. Man, feels like it's been a long one hasn't it?
I know I've been absent for two months, and really that's due to Chris not uploading anything to "Chris Neo". I won't declare the series dead yet. Chris recently posted on Facebook that he's looking for a musician for something coming next year. I don't know if it's for Chris Neo or something else, but it's something. Wonder if he's one of those "For Exposure" jackasses.

So like last year, I'm foregoing the Year End List, I just felt there wasn't enough to talk about. Chris Neo was a big pile of boring, with not very many awful things other than a couple lies, clickbait, and sponsored content.
The majority of Chris' dumb moments came from Facebook, whether it's freaking out over "Illuminati symbols" on Nickelodeon or claiming the reason his sites were down was due to hackers. In fact, Chris started to showcase a lot more paranoia.

And it's only getting worse.
On December 19th, he posted this on Facebook. 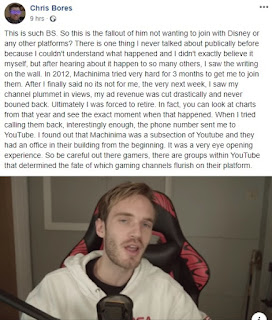 Boy there's a lot to parse here.
It's linking to an article from ValueWalk (never heard of them either) about the teacher that criticized PewDiePie, and one of his students recorded it and posted it online causing all of Felix's fans to go after him, even finding pictures of his daughter and spreading them around. Charming people aren't they?

Chris is claiming this is the "fallout" of Felix not wanting to join Disney or "other platforms". That is not remotely close to what happened. Felix posted a video where he talked about Fiverr, and in it he paid a couple guys to hold up a sign that said "DEATH TO ALL JEWS" and laughed about it. Advertisers saw the video and freaked out, pulling their support. Maker Studios, who are owned by Disney and had been supporting Felix for years, proceeded to fire him. All this starting a chain of events leading to the Ad-pocalypse. So no Chris, he didn't reject Disney, they rejected him. I get the feeling that Chris didn't do his research, merely saw a headline that said "Disney fires PewDiePie" and since this happened a while ago, he forgot the details and just remembers two of those keywords.

And then Chris enters liar mode, you can tell because he uses certain phrases that he always uses when he lies like "I didn't want to bring it up before" and "I couldn't understand it" and "I saw the writing on the wall". He is a really bad con artist.

He claims back in 2012, Machinima wanted him to join their network. He said no because "it wasn't for him" and then claims they somehow affected his views and ad revenue. *sniff sniff* I'm smelling horseshit.
So 2012 huh, what happened then? A lot of nothing for one. He did his reviews of Silver Surfer and X-Men, he tried the whole "IG Shorts" concept, some awful IG Neo reviews including that Sonic Generations one where he didn't even play the game and just stole footage, the E-Begging spoof where he attempted to dunk on James Rolfe (and failed), oh and... Skylanders. Well, I don't think deluge started until 2013 so I can't pin it on that. Perhaps the lack of activity had something to do with it? Reading through my past posts, I note that Chris took a long time to do things. It's very likely your lack of views and ad revenue have more to do with you barely putting out content and it's not some "conspiracy" against you.
Also, what do you mean when you say "it wasn't for you"? I'd ask if he saw that Machinima gave out bad contracts, but I doubt Chris is smart enough to read through those.
And another thing, if this happened, why didn't you bring it up in your Opening Up video? Surely you could have used that to keep the crocodile tears flowing instead of blaming James Rolfe for everything.

"I was forced to retire" In 2012? Nooo you were still making videos. You kept going for a while after that. Who are you trying to fool? Your first known "retirement" was around the end of 2014, then you ended up joining a network after all (hence your uptick in content in 2015), before slowing down and announcing a second retirement in 2017. But now you're back as Chris Neo... sort of.
See this is why telling the truth is so much better, you don't have to keep track of all the stories you made up.

So we can see the moment it happened? Let's see...checking Socialblade... unfortunately I can't seem to view statistics older than January 2016, but I did notice a substantial drop around October and November 2016. What happened here? *checks* Oh that's right, you deleted a ton of your videos! When you delete your videos, the overall view count goes down, and thus your channel loses notability with advertisers. But this happened in 2016, you're talking about something that happened in 2012. Wait, are you getting your dates mixed up again? Even so, Machinima had nothing to do with those views dropping, you did it yourself. You pulled the trigger and that's why there's a bullet in your foot.

Then he acts all shocked that... Machinima is a part of YouTube! DUN DUN DUUUUUUUUN! Oh wait, anyone with a brain could figure that out.
"It was very eye opening" Another one of his usual liar phrases.
Then he tries to warn us that there's some secret YouTube cabals that are keeping the gamer down and unable to "flurish". Keeping gamers down? I know what must be done! We must post pictures of the Joker and yell "GAMERS RISE UP!" No wait that's fucking stupid.
Also, it's spelled "flourish".
I just realized, what does any of this have to do with the teacher that criticized PewDiePie? Chris is such a narcissist, somehow making it all about himself.

Oh wait, but there's more. An old friend of Chris decided to contribute to the conversation. 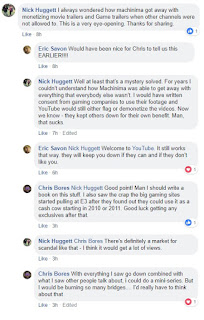 For those that don't remember, Nick Huggett is SWAGshow. One of the only YouTube producers willing to work with Chris. How's his YouTube career? *looks* ... Yeah I think it's just a hobby for him now.
You're surprised that Machinma can monetize trailers? You realize they're essentially a corporation and thus they have a little more leeway when it comes to that. They're not the only ones that do it either. IGN, GameXplain, GameSpot, official Nintendo, Playstation, Xbox channels, they can all monetize trailers. The "little guy" can't because they don't own the content. They're just reposting a trailer. Now if they were to, say, do a trailer analysis or (god forbid) a reaction, then they could attempt to monetize. That puts it in the realm of transformative work, which really needs an overhaul in the age of the internet.
EDIT: Yes I know those channels don't own the trailers either but there's a difference between companies and the little guy.

What really gets me are Chris' next two comments.
"I could write a book about this" Please do! I want to see this shit, to see how badly you explain and mishandle everything. If it's anything like Ghost Hunting 2.0, it's going to be a glorious disaster.
Now this I don't get. He claims people were using E3 as a "cashcow" in 2010 and 11. ... What? Pretty sure people have been using E3 as a "cashcow" since *checks notes* 1995. You know, when it began. What are you talking about?
Exclusives? Pretty sure E3 was quite open then, and it's more open now.

Below that, he states he could do a mini-series about all of this, but he would be "burning bridges". You still have bridges? Fuck off with this Chris, if anything you sound more and more like Alex Jones, at least you have still have YouTube.
Really though, it's clear you still need it. Minecraft Puppet Steve now has over 450k subscribers, though the views aren't doing too hot lately. Still better than the views on Chris Neo. After two months, your latest video hasn't reached 15k views.

It sounds like Chris is just getting more and more paranoid. Like he's adopting the idea that his lack of success on YouTube isn't his fault, but someone else. We've seen this before too.

I'm sorry to end the year with a post like this. Hopefully 2019 brings us better material to work with. Maybe Chris will realize the Neo content is boring and go back to being terrible as opposed to dull. Happy New Year everyone.
Posted by BatDanNight at 3:15 PM 76 comments: