More Confirmation for a "Summer Return"

Finally, the weather is warming up.
So Bores posted something on Facebook, which according to my informant was done in extra big font to signify how important it is. 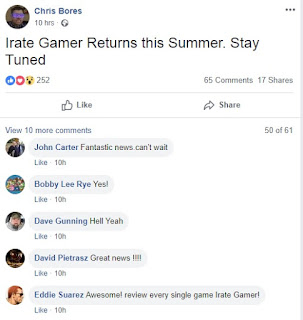 So yeah, further confirmation that he's doing game reviews again "this summer"
Notice how he specifically says "Irate Gamer" and not "Chris Neo" or something else. Prior to this post, he asked the people on Facebook what he should do. Classic style IG, current Chris Neo, serious stuff, "educational" stuff, and just about every fan said "classic clown classic clown". So it seems it finally penetrated his thick skull that he should keep doing the shit that was giving him views. Notice how there's 65 comments, normally his posts only get at most 4. But this and the last post asking what he should do got way more. It's almost like fans only care about that and not the other shit he does. Though the post about "Illuminati imagery on Nickelodeon" got a lot, but that's mostly people making fun of him. By the way, props to Brad Jones for including a reference to that in his Left Behind video.

Now what does this entail? Is Chris actually going to bring back Irate Gamer? When he launched "Chris Neo" he said it was the Irate Gamer's return, and as we soon saw it wasn't that at all. So is Chris going to do classic clown shit or is it "another new direction" that like Chris Neo will completely bomb because it's not what the people want. He does that so often. "Stop doing Skylanders, or put it on another channel" "Okay... no wait this sucks, more Skylanders!" Who's to say, all we can do now is wait and see.

Weirdly enough, I noticed that Chris shares some parallels with Krusty the Clown. Hear me out. Krusty is only good at one thing, entertaining kids by acting like a buffoon. Krusty's attempts at branching out often end in failure. Adult comedy he fails, serious acting roles he fails, even deviating from the clown act a bit would result in failure. For a more in-depth look at that, check out this video from TheRealJims.
Chris' only success seems to come from acting like a buffoon for kids. Irate Gamer, Puppet Steve, that's where he got the most views. Chris Neo, ghost hunting shit, Letter People, these did not catch on at all. But even then they seem to lose steam, IG went downhill, and Puppet Steve seems to be the same. Despite having over 500k subscribers, the views he gets rarely break 100k now. Hell the last video to do that was one about the Sonic movie posted March 5th. This is not healthy.

Another big question is, if Chris does indeed return to classic style IG, will the fans return too? Despite having 157k subscribers, only a small handful of those bothered to watch Chris Neo. Hard to say what will happen going forward.

That's all for me. Enjoy your Spring!
Posted by BatDanNight at 8:45 PM 109 comments: