It's 2014 and Chris is still committing plagiarism! Did all those years of criticism and angry videos not tell him it was wrong?

Today on his site, he posted an article called 10 Disturbing Facts That Happened on Nicktoons Cartoons.
I looked in the article trying to locate the source as I know he's not dedicated enough to make a list like this (yesterday he made a post about custom Minecraft figures and said he was too lazy to convert centimeters to inches), but I couldn't find one.
Thankfully, Harrod did (thanks man). An article at Answers.com: 12 Twisted and Dark Things We Totally Forgot Happened on Nicktoons

Notice how Chris copied the exact same writing for each one. Except for two he removed for some reason (the Rocko's Modern Life character "Dr. Bendova" and the Ren & Stimpy scene where Ren forcefully removed the nerve endings in his teeth). Probably under the belief that removing them absolves him of plagiarism (it doesn't).

Chris... what the fuck man? I know this isn't the first time I caught you stealing from other articles (mentioned here) but now you're stealing poorly-made Buzzfeed-esque lists? I know you're desperate for money, but this isn't the way to do it.
Seriously, just because you stop stealing from one source, doesn't give you carte blanche to steal from others. This is the internet age, information travels faster then ever, people will find the sources.

Also, as Harrod pointed out, the English in the title is all wonky. "Facts that happened", facts don't happen, they just "are". A better title would have been "10 Disturbing Things from 90s Nicktoons". Oh and "Nicktoons Cartoons" is redundant.

UPDATE: Forgot to mention. I'm moving on Friday and will be without internet until Sunday afternoon. If Bores posts anything during that time, I won't be able to cover it until I'm settled in. Thank you for your patience.
Posted by BatDanNight at 3:42 PM 93 comments:

Skylanders... Skylanders... fucking Skylanders...
Contrary to what Chris believes, he does NOT get "monstrous" views for making Skylanders content. And if he gets higher than average ones, it's not because of Skylanders in general, but for "checklist videos". Videos where he lists off all the upcoming figures for the next game, those are the ones that get him views. Not the individual preview videos from E3 or whatever stupid Skylander event he gets invited to. I am so sick of this shit...

The first of the recent Skylanders videos was Bores attempting comedy and failing hard. "Rejected Skylanders Ideas", stupid characters he thought up that wouldn't work in Skylanders. It's not funny and the drawings he made for it are terrible.
"Here is a satirical look at Rejected Skylanders that will never ever grace store shelves." Pretty sure you don't know what satire is Chris. Nothing about this was satirical.

The second video was Bores looking over a Skylanders poster. Rather, a low quality picture of the poster he printed off DarkSpyro or something. By the way, DarkSpyro is where Chris gets all his Skylanders info, he never mentions it because of his ego, and the one IG thread I saw there mocked him.
What I saw of the video had him mention Gamescom. Holy shit, he does know it exists! After completely ignoring it last year! Oh, of course he doesn't mention any of the other news, only fucking Skylanders. New Tomb Raider "timed" exclusive to Xbox One and the subsequent freakout? Derp. New Silent Hill produced by Hideo Kojima and Guillermo del Toro? Derp.
You know what disturbs me about the Skylanders videos lately? The posters. He plasters Skylanders posters over his old Nintendo Power ones, almost like a subtle "Fuck you old fans, this is my new gig now!" Or Chris is lazy and couldn't be bothered to remove the old posters for these videos... Either way it speaks volumes about who he really wants to watch his videos.

The third video is the full "mini figure" roster for Trap Team. Likely taken from DarkSpyro. I really don't care...
The other day, Bandai revealed they were jumping on the "Toy-to-Game Connectivity" train with a Kamen Rider game for PS3 and Wii U. Think Chris will talk about that? Ha! That would mean actually knowing what Kamen Rider is, and knowing the type of moron Chris is, he would call it a "stupid Power Rangers rip-off".
Instead, Chris is going to talk about.... Well, here's a comment I found in the second video. 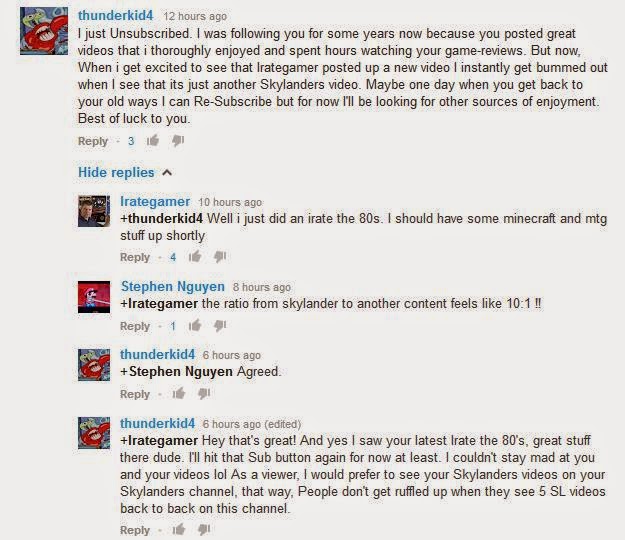 It's bad enough you outright admit you only do Skylanders videos for views (which is incredibly cynical), but now you're giving in and jumping on the Minecraft bandwagon years after fans have been asking! Especially after you said on your site you "don't get it". (http://theirategamer.com/south-park-teaching-us-how-minecraft-is-viewed/). But now suddenly you want to talk about it. You're a whore, forcing yourself to play something you never care for to get views. You're no better than DSP now.

Also, it seems Chris has hidden his sub count. Now that's cowardly. He knows he's been losing them and he wants to hide that now. I just... I don't even know. Chris better figure out what he really wants or he is beyond internet-dead.

UPDATE: Bores released the Minecraft video. It's... about action figures. Not the game, but the fucking toys. If you didn't believe it before, it's obvious now, Chris cares more for toys than video games. He would rather be Mike Mozart than James Rolfe. His views are gonna plummet hard.
And the effort continues to be dead with really poor audio balancing throughout. He's been doing this for how long?
Posted by BatDanNight at 10:29 AM 76 comments: